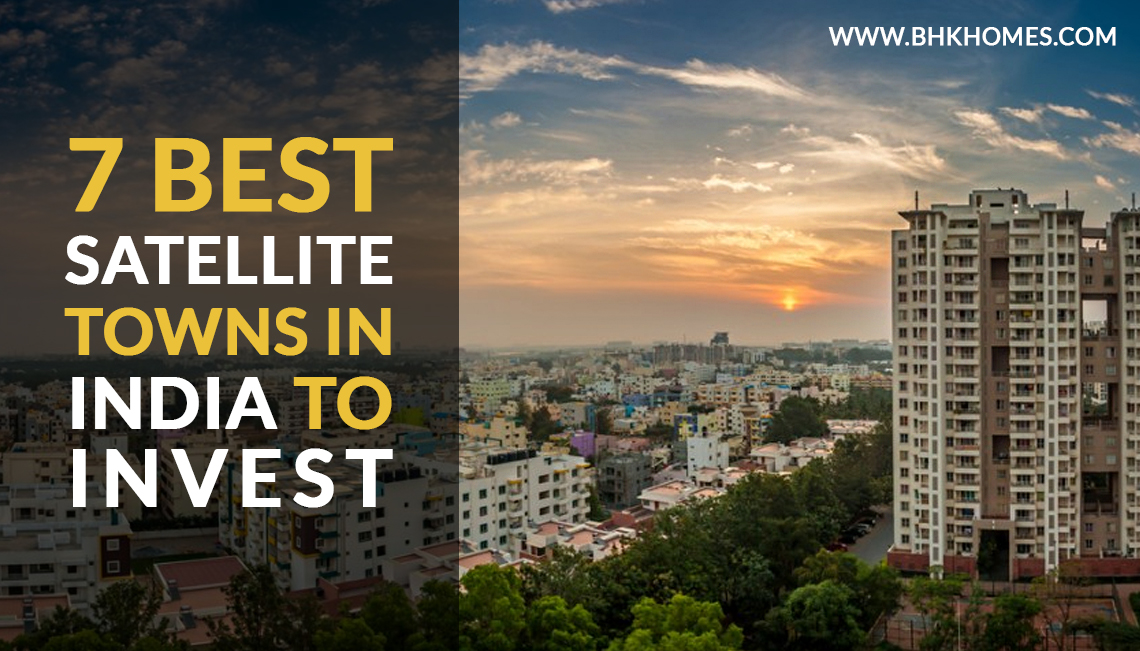 7 best satellite towns in India to invest in Real estate

The rapid rate of urbanization has initiated an array of challenges in major cities in India. The massively growing population is one of the significant issues faced by metropolitan cities. Satellite cities are planned cities that are developed to manage and contain urban sprawl. The main aim of these cities is to create a perfect balance between the population and available resources, for an environment-friendly and sustainable development.

India has many beautiful cities with a more interesting environment where every business from small to big can grow tremendously. There are various places where you can put your money in the real estate business which expands from the major cities to the lower parts of the country. The prime cities of India, such as Delhi, Pune etc. are said to be overcrowded, but has the quality facility such as the satellite planning. The nearby towns are taking a new turn of advancing in infrastructural development, and this is going to help create more space for real estate investment in the future.

The 7 satellite cities, which has the best investment options:

Gurgaon
Gurgaon is one of the most famous satellite towns in India, earlier it began as an extension of Delhi but now enjoys the status of a prime real estate location. Its connectivity to Delhi and being at a prime location such as Sohna, Dwarka expressway, Bhiwadi gives it added advantage and make it favorable for realtors. It is also known as the most preferred destinations amongst the property buyers, as it offers space and comfort, along with affordability.

Sonipat
Sonipat offers retail, residential and commercial properties at a much better rate, leaving considerable scope for investors to get a high return on investment. This area emerges as one of the favored destinations for realty investment due to the Kundli-Manesar-Palwal (KMP) Expressway. The city has a robust infrastructure and excellent connectivity to the other parts of the state.

Kolkata
This neighborhood town of Kolkata is an evolving satellite city which offers commercial spaces, entertainment hubs, high-end planned residential projects, central business centers and many more. Some of the residential properties that are coming up in this location are Greenfield Ambition, Tata Avenida and many more.
Navi Mumbai, Thane, Kalyan, Vasai and Palghar

These areas around Mumbai city have witnessed tremendous growth in the real estate sector. It is emerging in the commercial IT/ITeS and residential hubs. RESIDENTIAL PROJECTS in these areas offer its inhabitants with all comforts and infrastructure services within the locality.

Amravati
From being a well-known industrial destination, the city is now becoming a residential hub because of its presence of industries and educational centers and tourism. The city also boasts of a robust rail network and airport, which will benefit its property market. Amravati enjoys connectivity to major cities like Nagpur, Mumbai, Raipur, Pune and many other parts of India.

Yelahanka
Yelahanka is a part of the northern suburbs of Bengaluru. As compared to other parts of Bengaluru, the property prices in this sector have remained within a reasonable range. As a satellite city project, it has now turned into one of the most sought-after zones in Bengaluru, not just on the residential zone but also on the commercial sector.

Pendurthi
The real estate market in Pendurthi, a neighbourhood of Visakhapatnam, received a major boost with the formation of the Visakhapatnam-Chennai Industrial Corridor, which has been a major growth driver in this region. This infrastructure project has brought with it various benefits, like improved connectivity and power transmission and delivery networks. This could further push industrial development and encourage IT companies to set up bases in the vicinity, thus, paving the way for residential real estate development.

It’s a thing of interest to note that the properties in the Satellite cities of India are in ever-increasing demand by the various property buyers. When you are looking for where to invest your money in real estate, then think of India. The motivating point in this country, comes from the friendly people, the environment, Municipal Corporation’s quality services and even the government. So you don’t have anything to worry about. It’s the prime time to come and invest in India, where and when to do it is here and now.