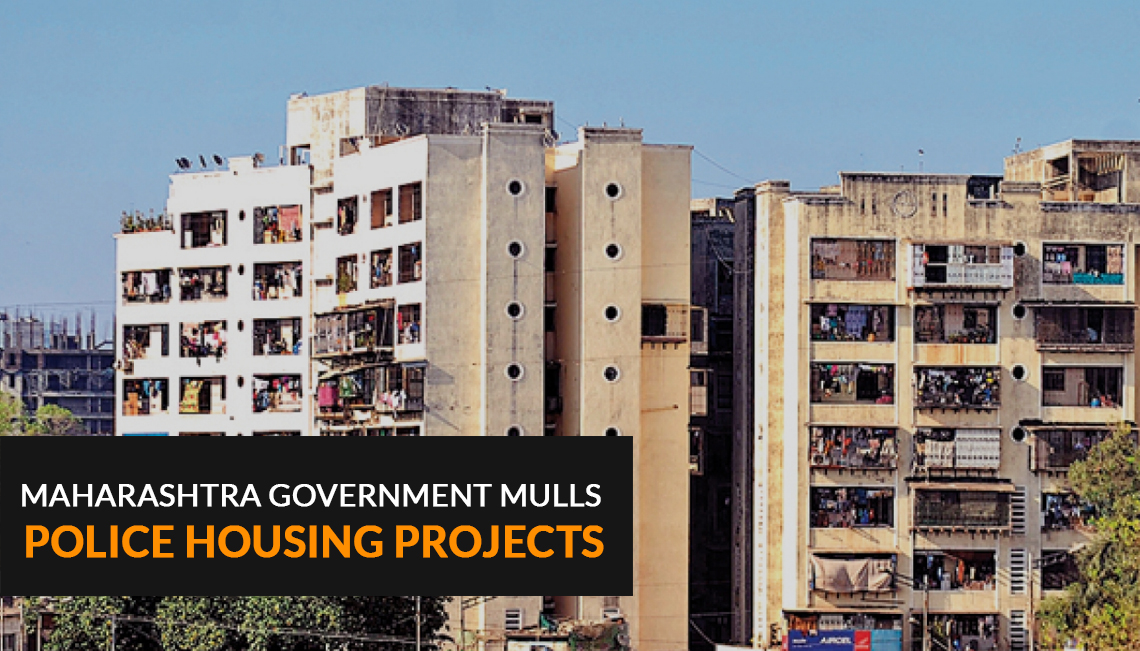 Looking to tap slum redevelopment projects to create affordable housing, the Maharashtra government plans to increase the construction limit for slum redevelopment projects that are on plots spanning more than an acre. The government of the state is mulling over a proposal to allot government land for housing projects for police personnel in major cities of Maharashtra.
The government was considering a proposal to provide houses to police personnel in cities such as Nagpur, Aurangabad, Nashik, Thane, Navi Mumbai and Pune by providing land to the state housing agencies, the City and Industrial Development Corporation of Maharashtra (CIDCO) and the Maharashtra Housing and Area Development Authority (MHADA). Apart from this, 43 projects including 21 residential ones for police personnel worth Rs 1,690 crore are in progress in Maharashtra.
Tenders are being issued for 5,611 projects worth Rs 1,280 crore. These projects are located in suburban Goregaon, Mulund and Marol in Mumbai, and at Akola, Satara, Jalgaon, Thane, Beed, Nanded, Raigad, Malegaon and Osmanabad. The chief minister asked the police commissioners and superintendents of police, to personally monitor and speed up the process to provide house to every police personnel, officials added. Minister of state for home Ranjeet Patil, director general of police Datta Padsalgikar, Mumbai police commissioner Subodh Jaiswal and other senior officials, were present at the meeting.
The Maharashtra government has increased the permissible construction area to house police personnel as well as government employees across the state. The government said Saturday it had raised the Floor Space Index (FSI) for redevelopment in police housing projects to 4. It will also grant an FSI of 4 to plots of more than 4,000 square meters in the jurisdictions of A-class municipal corporations for housing of employees of the state government, local bodies, state undertakings and authorities. For small plots, the state urban development department on Friday issued a draft notification to increase Floor Space Index (FSI) given for large slum redevelopment projects to 4 from the current 3 granted under the slum redevelopment scheme.
FSI refers to the ratio of the extent of construction on a given plot area. In B and C-class corporations, housing projects for government employees can avail of an FSI of 3 for plots of over 4,000 square metre and 2.5 for smaller plots, while all government housing projects in D-class municipal corporations will get an FSI of 2.5. “We have deliberately put caveats of minimum plot size and road width for the projects to be eligible for higher FSI, as this will ensure there is no over-densification and a strain on available infrastructure near these plots,” said a senior official from the state urban development department. The developer will be required to build low-cost homes for the economically weaker sections and lower-income groups using the additional FSI and hand these over to the state at the construction cost. Officials said the affordable housing component may also be useful to accommodate squatters on the plot not eligible for free housing under the government’s slum rehabilitation scheme.
“This decision has been taken to spur redevelopment of old police housing and other government quarters. The Maharashtra Police has a requirement of 1,22,952 houses for its personnel. In the last one year, 15,579 houses have been built for the police force in the state,” an official from the Chief Minister’s Office said. He added that the move would help the government achieve its target of building 1 lakh houses for the police in the next two years. The increased FSI would also be made available to private developers and landowners willing to build houses for police and government employees for an incentive, the official said. As an incentive, builders are granted a higher construction area and are allowed to commercially exploit the remaining public land free of cost. Under the scheme, existing norms permit granting an FSI of 4 only in cases where the tenement density is more than 650 per hectare, irrespective of the plot size.
The government has invited suggestions from the public. The state grants an FSI of 4 only in two other schemes — cluster development within the island city and redevelopment of colonies of the Maharashtra Housing and Area Development Authority (MHADA) across the island city and suburbs. Here too, the FSI of 4 is only give n for plots larger than 4,000 square metres and next to roads 18m wide.